Born from a passion for adventure.

Who are we, and what drives us?

First and foremost, we are adventurers. We like exploring off the beaten path. Travelling means to us, go to new places, experience new cultures, make new friends. We also love windsurfing, and we love New Zealand. Mostly though, we love seeing people enjoying themselves as much as we do.

What better way of combining all these passions than having a business, that enables people to see New Zealand the way we want to see it and share it with visitors from all over the world.

Water Nomads was born out of this desire in 2018 as a humble concept: offering long-term rental of quality windsurfing equipment for international visitors. Soon we added performance surfboards to our rental fleet and we have grown since to become New Zealand’s premium Surf and Windsurf centre for long term equipment hire.

In 2019 we introduced our Surfari trip packages, bringing you to new places throughout New Zealand. What started out with a wave sailing trip to Taranaki has got now several destination, and more to come! Supporting local regions and their businesses, Water Nomads provides the ultimate experience: come a stranger, leave a friend.

The adventures continued with Heidi’s ever keen nose to explore and Bevan’s can do spirit.

Growing up on the shore of Lake Constance, Germany, as soon as Heidi could hold the boom of the first Windsurfer she was hooked. And the youth trophies attest to her passion for the sport. With Europe on the doorstep and Uni years in Kiel, before long her desire to explore coastlines, seeking waves and adventure was written in her DNA.

In a spontaneous moment of fate, in 2009 Heidi found herself in New Zealand, backpacking out of the back of her ageing Subaru with little more than a surfboard and a mountain bike. The six month journey left her in awe of the stunning and diverse coast, but more important to her, she found a variety of people with an outlook on life that resonated.  It was barely 18 months later that she returned as a New Zealand resident.

Becoming established seemed easy, the Auckland harbours with east and west coast beaches provided Heidi with an unlimited opportunity to windsurf and surf like she had never known. It seemed almost natural Heidi became a Starboard and Severne Team Rider for NZ Boardstore. But it is adventure that flows in Heidi’s blood, now exploring the offerings of the Pacific. The learnings of air travel to remote destinations with lots of gear was quick. With it was the realisation of the absence of any dedicated windsurf centre anywhere in New Zealand, meaning people had to bring their own gear.

Heidi’s concept was simple: create a long term Windsurf and Surf hire outlet, no restrictions on where or when. In other words, rent your equipment and take it on your journey with you, a week, two weeks, three… And not clumsy, old, well beaten  learner boards either. The latest premium equipment from top brands that any intermediate/advanced/pro rider would feel well at home on.

Soon though, it became clear to Heidi that locals love their home spots, which is great, there is always so much you need to know…  Wind, tide, weather variables, hidden dangers, access, where the best coffee can be found! It is always hard to break into a new unfamiliar spot when you have limited time, so better to get some advice.

Water Nomads added Trips to their offering, Heidi found she could introduce seasoned riders to new unfamiliar places, with her strong knowledge on who, where and how best to make it work with no effort needed by the guest riders. Surfari’s have now become a staple offering and the most popular destinations remain Taranaki and the far North.

Being an adaptable soul, there are few things Bevan hasn't tried. Growing up in the city of Christchurch, NZ, the city/rural/backcountry were all at his fingertips. The wilderness captured Bevan's heart early. Ever since he can remember, venturing into the unknown was normal.

The backbone of the South Island, New Zealand has been the playground that defined Bevan. Hiking the backcountry, learning the limits of oneself physically and mentally. This inevitably included Mountain Biking and Snowboarding. With his adventurous spirit, Bevan developed a keen eye to record stunning places and beautiful moments which founded a long standing passion for photography. Eventually though, New Zealand became small and seemingly suffocating, the Kiwi OE (overseas experience) beckoned.

Hitching and traveling Canada in the thick of winter for six months snowboarding, Bevan formed an appreciation for warm company in wild places. Before long though, the funds dried up and London became an antipodean nest and gateway to the finer trappings that Europe has to offer: fine food, wine and Belgian beer. After nearly five years, there was something missing, that raw wilderness – New Zealand…

Returning to NZ, Nelson became the new home, a backcountry hiking and mountain biking heaven, where unsurprisingly road cycling and alpine caving was added to the list of experiences to explore.  After four years a career choice brought Bevan to Auckland, and it didn’t take long before Bevan was introduced to the world of windsurfing. A holiday on Maui was a steep learning curve, but his water-starts were perfected.

It quickly became apparent to Bevan that New Zealand lacked a specialist hire centre for water-sports equipment. Especially for the bulky windsurf gear. And with luggage costs increasing, baggage allowances shrinking, and the gear damage liability of airlines impossible to recover. There had to be a better way to help the international traveller to make the most of their journey to far flung New Zealand.

Teaming up with Heidi – Water Nomads was formed.

Whenever possible we will use re-useable items rather than disposable ones to save waste.

Tiaki means ‘to care and protect’ in Te Reo Māori and this Tourism NZ  campaign gives tips on travelling responsibly while in New Zealand. 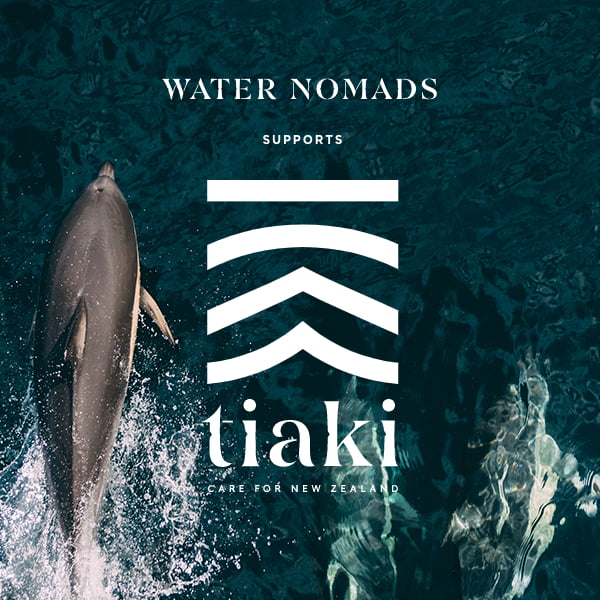